HOW THEY MET | Andrew and Kayleigh met nine years ago at the end of high school. They saw each other regularly with mutual friends in the small town of Georgetown, Ontario, and started dating soon after. Two years of dating later, Andrew got a promotion at work and moved to Alberta for 11 months while Kayleigh was in her final year of college. Throughout that time, they dated long distance until Kayleigh join him once she completed school. After six years of being together, they got engaged. THE CEREMONY | A small wedding at the family cottage is exactly what Andrew and Kayleigh wanted. When Andrew’s grandparents agreed to host the ceremony right on their dock in Port Carling, they were overjoyed. To complement the rustic theme of the setting, a branch arch lined with draping and flowers was used to decorate the altar alongside burlap bows on every chair. The ceremony was held at 3 p.m. with the warm sun shining down on everyone, while neighbours in boats gathered in the water to watch the ceremony, wave and congratulate the newlyweds. It was everything they had ever dreamt of.

THE RECEPTION | While the bridal party took beautiful pictures with Jessica Douglas Photography after the ceremony, guests were invited to enjoy cocktail hour and snacks at the reception. Dinner consisted of a cranberry, spinach and sunflower seed salad; herb roasted breast of chicken merlot jus; and medley of fresh vegetables with rosemary potatoes. The couple shared their first dance to “Perfect” by Ed Sheeran featuring Beyoncé.

THE DECOR | To continue the rustic atmosphere of the day, twinkling lights, draping and gold chiavari chairs decorated the hall. Vintage cutlery was set at each table alongside wooden centrepieces accented by flowers and candles, while at the sweet table, a love-shaped balloon hung above a naked cake and cupcake tower for guests to feast on. 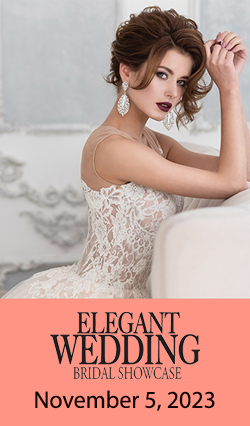